Use the Domino Effect to Crush Your Biggest Goal 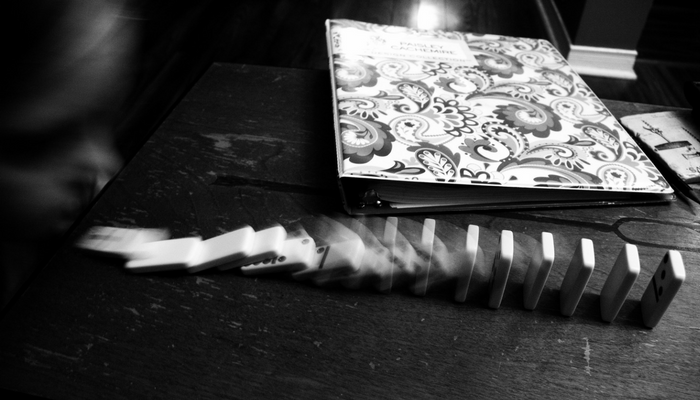 All great things have small beginnings. Every masterpiece has its first brushstroke, every building its first brick and every life its first breath. The same rule is true for nearly every aspect of our world and our personal success is no exception.

On its own, a domino isn’t much. It’s about two inches tall and weighs about as much as a small box of matches. But with the domino comes a force. In fact, one domino has the capability of knocking down another one that is 1.5x its size. This seemingly infinitesimal ability compounds to produce incredible outcomes.

Imagine a long string of dominos lined up one after the other, with each one progressively 1.5x larger than the last. If you were to knock down the first two-inch domino, you would set off a chain reaction that would, by the 57th iteration, produce enough force to knock over a domino stretching the distance between the earth and the moon.

In The ONE Thing, we call this concept The Domino Effect. The path to great achievement is often lined with steps that are aligned with one another. No matter how small the first step is, the power generated from that first activity compounds into something much greater. There is literally no limit to the potential you can achieve when your priorities, goals and daily actions are lined up for you to knock over one by one.

Line Up Your Dominos

It may be tough to swallow, but big success doesn’t happen all at once. Success is sequential.

In 2004, Robert Weisberg of Temple University put together a case-study of Pablo Picasso’s masterpiece Guernica and found that even the greats don’t rely on “strokes of genius”.

Largely considered one of, if not the definitive piece he produced during his career, the painting is seemingly sporadic and unique, and evolved to become a symbol of the Spanish Civil War. On first inspection, it certainly looks like the result of a sudden flash of inspiration. However, Weisberg’s analysis identified core pieces of his painting in his previous work, suggesting the masterpiece was actually the culmination of long chain of dominos that were knocked over continuously throughout his career.

When Weisberg took a close look at the actual development of the painting, he noticed that Picasso, a painter famed for his wild creativity, actually worked from a process.

Instead of coming up with one idea after the other, Picasso began with a simple vision and pursued it from a small starting point. His first sketch began with the end in mind and formed an extremely rough outline of a woman, a horse, and a bull – his first domino. From there he continued to knock over domino after domino, focusing on the outline, each character and object individually and, with few exceptions, sequentially. After 45 sketches and nearly a month’s time, he had more or less created Guernica with no guesswork involved.

If you want to accomplish something BIG in your life, you have to work from a process — you have to line up your dominos.

Goal Setting to the Now

Take a note from Picasso. Instead of trying to do everything at once, it’s more productive to take smaller steps. When a large goal is broken down into several smaller pieces, even the most audacious goal can be accomplished.

We recommend using Goal Setting to the Now to help you identify the steps you need to take to get what you want out of your life. The process begins with the end in mind. Once you’ve established a vision for where you want to be, it will walk you backward, revealing a path toward achieving your big goal and your first domino.

Once you know what you need to do today to ensure your ultimate success, the only thing keeping you from achieving your goal is you.