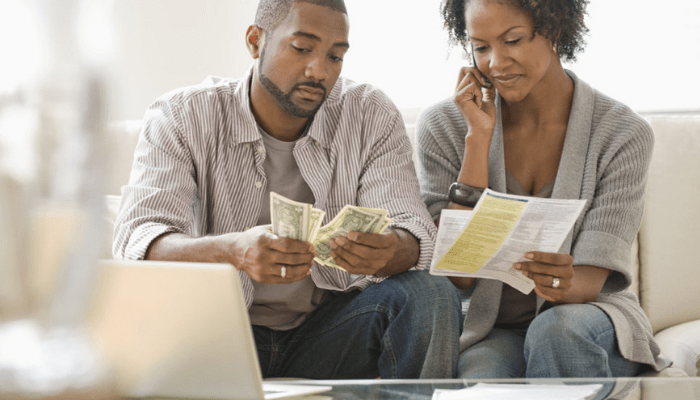 Money is important. So important that saving more of it rounded out Google’s list of the top 5 most popular goals set, along with getting healthy, getting organized, living life to the fullest, and learning new hobbies.

But that’s nothing new, honestly.

Year after year, finances top the list of things we aim to improve about our lives. And while that’s kind of a good thing, it can also be a sign that we continually fail at those goals—“we” being the operative word in that statement.

Money is a Hot Button Topic

When it comes to our financial goals, we often have a general idea of what we want to achieve, but find that it’s not in alignment with those that directly influence the goals we set.

In other words, we forget that we aren’t the only ones with access to our bank accounts.

Rather than being a positive goal to work toward together, we often avoid talking about our finances with our significant others. We fear that it will become the subject of disagreement, stress, or even shame. However, leaving them out of those goals doesn’t make cents. (Sorry, we couldn’t resist!)

Let’s get real. Money is the second leading cause of divorce. It’s the root of so much strife, in part, because we all have different feelings and approaches to money. It’s also because we fail to come together and agree on our financial priorities, rules, and goals. When it comes to money, it’s not uncommon to find that we aren’t even speaking the same language as our significant others!

This barrier is a problem. Other than stemming from a lack of steady and frequent communication on the subject, there are also fundamental viewpoints and disagreements to contend with. Each and every one of us has our own baggage when it comes to money. Whether we itch to spend, pinch every penny, or are a serial investor, the differing perspectives we hold on money can make it hard to navigate a shared journey. That’s why the first step to getting on the same page is identifying and acknowledging our differences.

What Financial Personality Do You Have?

In its simplest terms, we can think of our relationships with money on an X-Y axis. 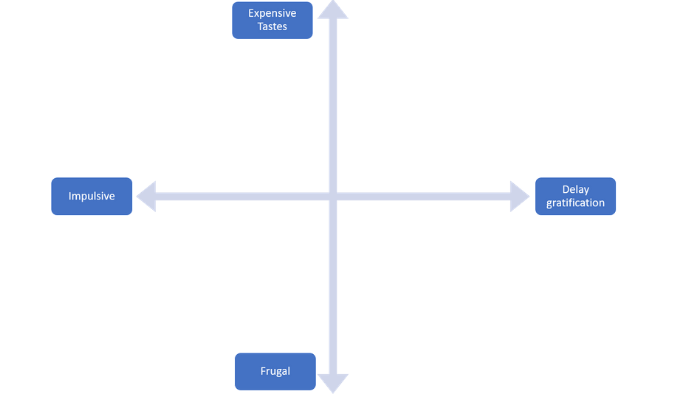 On the left end of the horizontal, X-axis line, picture someone who is impulsive with their money. These people are the type to add a few extra items in their shopping cart while waiting in the check-out line or are overcome by a desire to own the latest and greatest gadget. They are cheap and impulsive or in debt from their ludicrous spending.

On the right side of the X-axis are those people who delay gratification when it comes to spending their money. These people hold off until they reach a certain goal or extensively research what they want to spend their money on. Regardless of their reasoning, they aren’t in a rush to spend money.

Using this graph, we can find a frame of reference for our own financial habits. And using it with the people who matter in our lives can give us a working comparison and greater understanding of one another.

For instance, setting financial goals with someone who delays gratification and has expensive tastes may be more likely to butt heads with someone who is impulsive and frugal. However, once given a framework for their own styles, they can begin to chart a plan that will satisfy both of their needs.

To better understand our own behavior when it comes to money, the MoneyType quiz is another fun tool to try.

After taking this quiz, you’ll be given a report on your money habits that nails you down in five different categories: Visionary, Producer, Nurturer, Epicure, and Independent. Each one has its own strengths and weaknesses when it comes to money that will add to a productive dialogue.

Taking this assessment or using the above matrix with the important people in our financial discussions give us a shared vocabulary that makes it easier to talk about the more delicate aspects of our finances.

Getting on the Same Page

When it comes to succeeding with our financial goals, we cannot and should not go after them alone. Instead, it’s important to get buy-in and support from the people who are involved in the journey. As David Bach, author of Smart Couples Finish Rich notes:

“The challenge with money is that if you’re not in the boat together, rowing in the same direction, it’s not a once-a-year fight, it’s constant.”

With that being said, if you’re ready to embark on a journey to accomplish your financial goals, keep the following key pieces of advice in mind.

Talk About Your Finances and Goals Often

One of the best ways we can get out in front of difficult financial conversations is to take away their status of being the elephant in the room. In other words, don’t shy away from finance-related conversations. Embrace them and have them often. After all, the more you address something, the less scary it becomes.

When we’re open to talking about money on an on-going basis, we’re better able to cast our vision for the future, determine how we’re going to accomplish that vision, and allocate our funds accordingly to make it a reality. Most anyone would likely agree that it’s hard to budget for something they don’t know about. Some advice we heard previously is ringing in our ears right now: budgeting for the sake of budgeting without a desired outcome simply feels like a restraint. However, if we are open to discussing future hopes and plans with the people who matter to us, we’re much more likely to come up with a concrete plan to work together on to push the ball forward and make that dream happen.

As the above survey also discovered, almost 95 percent of those respondents who say they have a “great” marriage discuss their money dreams with their spouse, compared with 45 percent of people in just okay or worse marriages. And they set long-term goals together (87% versus 41%, respectively). These spouses have learned to take the fear out of the conversation and replace it with a plan of attack for success.

Create a Safe Environment for Discussion

Answers to our financial quests are not always straightforward or easy. But they get easier when we understand that everyone comes to the table with different ideas and experiences with money and we can communicate this awareness to one another. In any type of potentially difficult situation, there should be an emphasis on creating a safe environment for one another. Therefore, to get on the same page when it comes to communicating our financial goals, we must communicate with one another from a place of understanding these differences exist.

We talk about the benefits of goal setting retreats a lot at The ONE Thing, and it’s no different when it comes to our finances.

A dedicated time for discussion set aside by both people is extremely valuable for setting the stage for open communication. During one of our recent podcasts, a couple who has been taking part in such conversations for almost ten years described their first goal setting retreat. During the interview, Jenn explains she was a little reluctant at the on-start of the retreat and afraid that she would be judged for her decisions around money.

That’s often a key concern, that judgement will cloud the conversation and the partners will have a hard time relaying their goals in a way that their significant other could relate to. That’s why it’s important to leave judgement at the door. When we sit down with the people who matter most to us, we must avoid making declarative statements. In other words, we aren’t right with our approach to money and they aren’t wrong.

Our goal isn’t more important than their goal.  Instead, an inquisitive approach is best. When we approach uncommon ground by asking thoughtful questions, we enable each other to self-discover the answers. By doing so, judgement stays out of the conversation and both people can own their goals and buy-in to the decisions being made. In Jenn’s case, she quickly came to see what could become possible when we sit down with people in our world to discuss our goals. As she describes:

“If our goals aren’t the same, that’s okay. It doesn’t make it a good or a bad goal, it makes us aware and insightful about what it is that the other person wants and there’s a way to bridge that gap where we both get what we want or help each other get what they want.”

An open dialogue about goals shouldn’t be relegated to only those topics that aren’t considered to be touchy subjects. We can achieve great things in all areas of our life – including those all-too-often hot button issues – by taking judgement out of the conversation. When we initiate a conversation and recognize that our answers may be different than the people that matter in our lives and work toward a mutually beneficial outcome, great things can happen.