How These Colors Affect Your Productivity 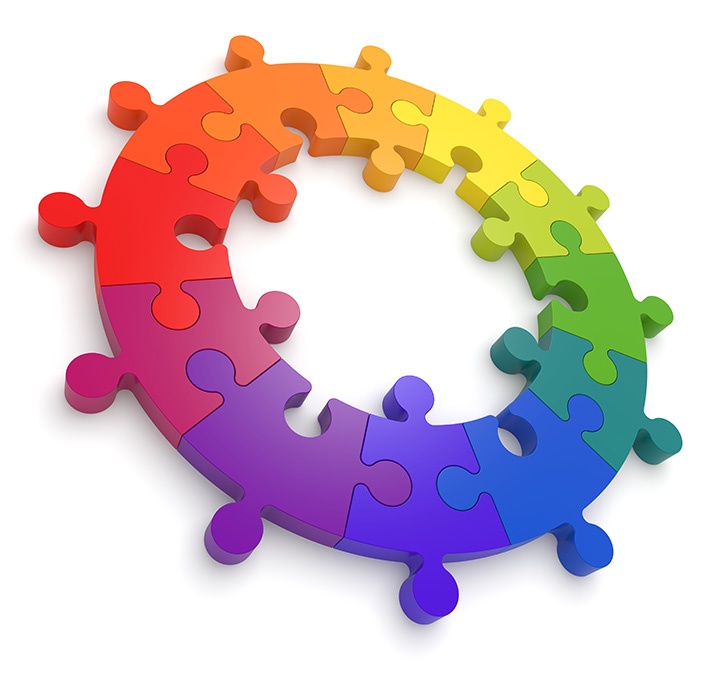 If you once owned a mood ring, you might be familiar with the idea that our temperament can change the color of a piece of jewelry, but did you know that researchers have confirmed that colors can actually change or influence our emotions?

Color theory is used in visual arts to pair colors together in a pleasing way or to create a specific effect. But the idea of using color to elicit a particular mood or response goes well beyond art. Businesses are now using colors in strategic ways around the office to influence behavior.

This guide provides a quick glimpse at how different colors affect people and how they can be used to help improve the workplace.

The color red has both positive and negative undertones. The bright hue jumps right out at people, which is good for stop signs, but it’s also connected to spam and bad letter grades. In fact, one study found that if students see red before an exam their test scores are likely to drop.

It may lower productivity, but there’s no denying red stands out. It’s also a stimulating color and excites the brain – a point that some color theorists believe goes back to our caveman days of using fire. Those characteristics make red an excellent color for drawing attention to details. If you want important notices to be seen, then use red in memos and signs.

Feeling hungry? You might be seeing red. It’s no coincidence that many restaurants choose to use red in their logo designs. Red is thought to be linked to an appetite. Consider painting your kitchen red to help instill a habit of eating at home.

Experts note one important caveat about red – how light or dark red is can change how it makes people feel. Unlike other shades, red at one end of the spectrum (pink) is perceived in a totally different way than the other end (burgundy). Pink is seen as fun and light-hearted, whereas burgundy is associated with sophistication and seriousness.

Blue is well known as a calming color that can slow breathing and lower blood pressure. But color psychologist Angela Wright has found that despite the tranquil feelings, blue stimulates the mind. The combination of calming yet mentally stimulating may be why blue has been shown to increase productivity.

That was the general consensus of a University of Texas study that found a blue-green room improved productivity better than red rooms and white rooms. In spaces where people need to focus and get work done blue is the hue to use.

Blue is also considered to impart feelings of dependability and trustworthiness. Painting the CEO’s door or office in a blue hue might give business a little boost by easing the minds of partners and employees.

Need another reason to incorporate blue around the office? In common areas blue is a good hue to use because it’s the most popular color among both men and women.

Yellow: To Get People Energized and Collaborating

Yellow is possibly the most inviting, uplifting color in the rainbow. No matter what shade it is, yellow is vibrant. If you want to create a more open, invigorating atmosphere adding accents of yellow could help without overwhelming the senses.

Research suggests that yellow should be used in small doses because it’s the least favorite color for adults. Another experiment found that people were more sensitive to noise in rooms that were painted yellow. Productivity certainly won’t be improved if employees don’t like being surrounded by yellow walls that make the room seem noisier.

In Dr. Wright’s Color Affects System she notes that yellow is the strongest color psychologically and can help spark creativity as well as memory. She says self-esteem and optimism can also be lifted with a moderate touch of yellow. Given these qualities, yellow may be best in areas where people do a lot of brainstorming, collaboration and creative work.

Have you ever wondered why the green room of a television show is green? It might be because green helps calm people down. Color specialists like psychologist Andrew Elliot note that green is found frequently out in nature, and natural surroundings put people in a calmer state. It’s so calming one study found people with Parkinson’s Disease felt better in a green room.

Get a double dose of the calming benefit by adding green plants around the office, especially in areas like the front lobby and break rooms, where relaxation is the goal.

Another interesting fact is the human eye can pick up more shades of green than any other color. Again, this is most likely because of its prevalence in the natural world. We’re so used to seeing shades of green, it’s considered to be a good background color that will be noticeable without distracting people and won’t cause eye fatigue.

Purple: To Increase the Perception of Value

When you need a boost of confidence purple hues can help give you an edge. For centuries purple has been associated with royalty and things that are regal in nature. It’s also believed to heighten mental awareness, which is a benefit for all of you thinkers out there! If you have a meditation room, purple would be the prime paint color.

You may not find as many purposes for purple around the office, but you may want to seriously consider using it for branding and packaging. Purple tends to give the perception of high value and luxury.

Surprisingly, some research suggests orange may be the best color to use around the office to boost productivity. It’s like mixing the best of red and yellow together. Orange imparts the idea of activity, enthusiasm and endurance – three things that definitely improve productivity.

But orange can be a double-edged sword. It solicits a stronger reaction than any other color, both positively and negatively. People tend to either love it or hate it. Men in particular are turned off by orange hues. That means, like yellow, it’s best used as an accent color.

Cultural norms, trends and past experiences can all influence the way a person reacts to a certain color. Despite all these outside factors, people appear to have universal, innate reactions to many hues. Before going with basic white and beige (which could lower productivity levels) think about how you could use color around the office to make employees happier, relaxed and more productive.